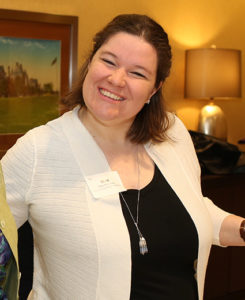 Mae Maloney is a 2007 graduate of Eastern Connecticut State University where she received a Bachelors Degree in Sociology and is a 2013 graduate of Smith College school for Social Work where she earned her Masters. Mae is a graduate of Leadership Greater Hartford’s Quest Program.

Since 2007 Mae has worked with Leadership Greater Hartford in a variety of capacities including serving as a Grants Manager and as Program Director for several youth programs. Throughout her tenure at Leadership Greater Hartford she has implanted an after school program at Hartford Public High School, developed a summer youth leadership program for teens throughout the Greater Hartford Region and organized numerous community service projects throughout the Capital City. Mae also served as an Intern at the Institute of Living in Hartford and Community Health Resources in Enfield. Mae currently serves as the Program Director for the Leaders On Board program and Encore! Hartford program.

Mae’s background in the nonprofit arena and training in social work has prepared her in several areas including program development and community organizing. She has served as a Big Sister in the Big Brothers, Big Sisters program in Hartford and has coordinated a program for special needs adults in Windsor. Mae has served on numerous boards of directors.

She currently lives in Windsor with her husband, Jason, their son, Finn, and a menagerie of animals.